KHOYAGUSHT (HOYAGUSHT)
The story of the Azerbaijani Mountain Jews began thousands years ago during their exodus from Israel. They passed through Persia, where they picked up an ancient, Farsi-based language and seasoned it with Aramaic, Arabic, and Hebrew, and most of them settled in Baku, Shemakha, and Kuba, three Azerbaijani cities. The Azerbaijani Mountain Jews also refer to themselves as Tats (pronounced like taught). “Tat” is a word of Turkish origin. The Mountain Jew settlements are not isolated, they live among the Azerbaijani people and often referred to as “Azerbaijani Jews.” According to statements by Azerbaijani ethnographers, the national culture and cuisine of Mountain Jews is almost identical to that of the Azerbaijani people.
Mountain Jews are well known for their delicious cuisine. The unique recipes of many Mountain Jew dishes have been passed down from generation to generation.
Many of their dishes have been influenced by Azerbaijani cuisine and often share almost the exact same names as their Azerbaijani counterpart. Byugleme (Buglama), Kyurze (Gyurza), Khashil, Osh (Pilaf), Dugovo (Dovga), Khayle (KyuKyu), Dolma, Chudu, and Ingar (Khingal) are only some examples of such dishes.
The Mountain Jews have their own strictly national dish as well, such as Khoyagusht–a dish made of meat, eggs, and chestnuts.
“Khoyagusht” is a word of Persian origin, as are the names of most Mountain Jew dishes. The first part, “khoya,” means “eggs,” the second part “gusht,” means “meat.” There are a several types of Khoyagusht: meat and chestnut Khoyagusht, meat, herb, and chestnut Khoyagusht, chicken and chestnut Khoyagusht, and a simple, chicken and potato Khoyagusht.
Properly prepared Khoyagusht is delicate and delicious. It could be cooked either in a frying pan or in an oven. Khoyagusht is usually served with rice (Osh), but sometimes on its own with Matzah bread.

Preparation:
Preparing the meat.
Place the meat in the pot, add hot water just enough to cover the meat. As the water comes to a boil, skim the foam off, add 1 onion, salt and pepper, reduce heat to low and simmer the meat for about 2-3 hours until meat is very tender. 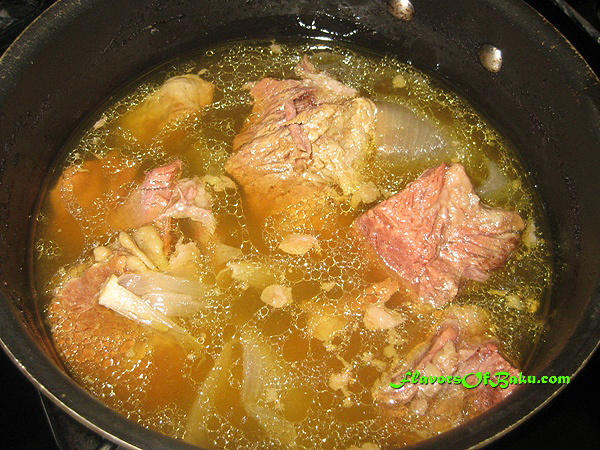 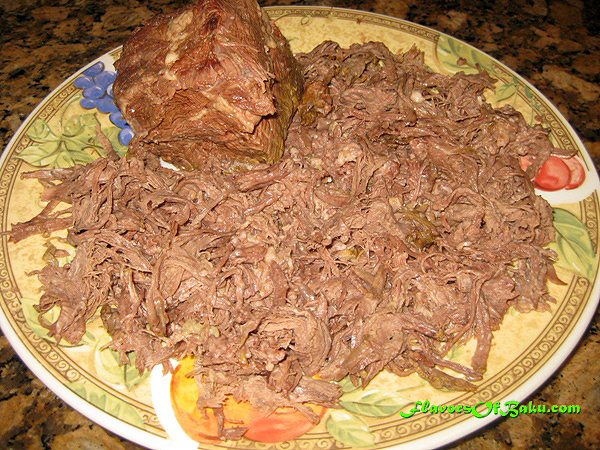 Preparing the chestnuts.
You can prepare Khoyagusht by using cooked and peeled chestnuts, which vacuum-packed and ready to add to any dish. They are usually available at any oriental markets. 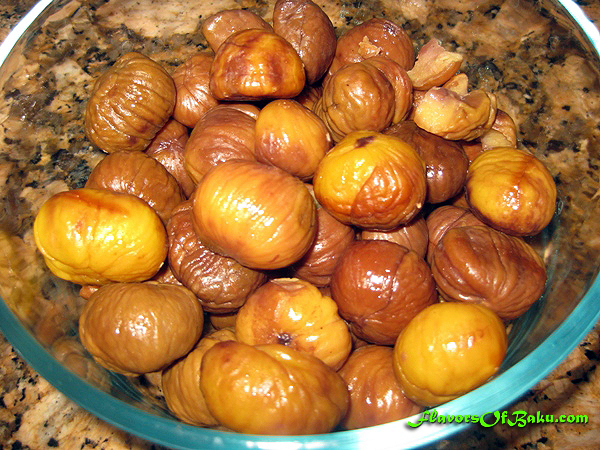 If cooking with fresh chestnuts, make sure they are plump, firm, glossy, and heavy for their size. To cook with the chestnuts, you must first peel the shell and remove the inner skin. This is usually done by boiling or roasting them. If you are pairing your chestnuts with other flavors, you need to boil them. To boil chestnuts, use a sharp paring knife to cut an X on the flat side of each nut. Bring them to a boil in a pot of cold water and let it simmer for 20-30 minutes until the chestnuts are completely cooked. Remove the pot from the heat and scoop out the chestnuts, a few at a time, and peel off the shell and skin. As they cool down, they become more difficult to peel, so leave them in the hot water until you are ready to peel them.

Preparing Bor-Khoyagusht.
Khoyagusht without eggs is called Bor-Khoyagusht.
Peel the onion, cut it in half, and slice it into thin half-rings.
Remove the fat from the surface of the broth and pour it into a skillet (you can add olive oil if there is not enough fat in the broth.) Warm the skillet and add the onion slices. Cook over low heat, until the onion is soft. 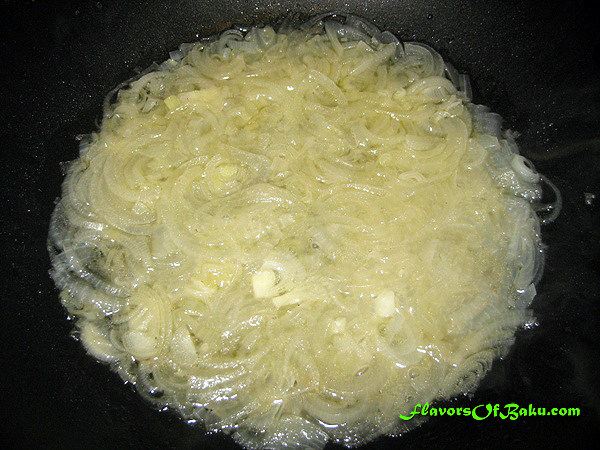 Add shredded meat and cooked chestnuts (cut them in half if they are too big) into the skillet with the onion and mix all together. Then add a few tablespoons of broth, cover the skillet with the lid, and simmer for about 20 minutes over low heat.
You can prepare Bor-Khoyagusht in advance and keep it in the refrigerator for a few days before cooking. 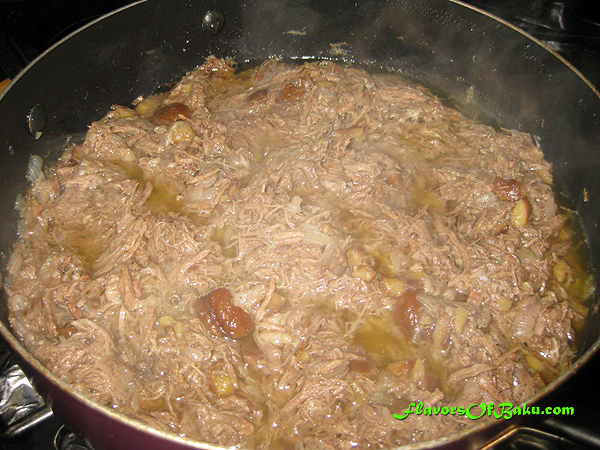 Cooking Khoyagusht.
Separately, whisk the eggs, add salt to your taste, and mix with the meat. 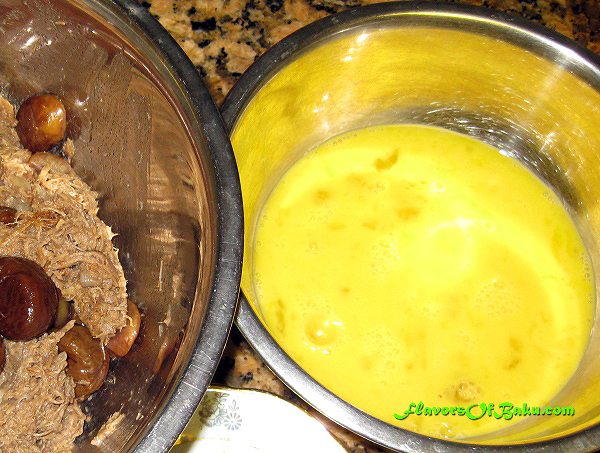 You can mix the eggs with the meat mixture right in the skillet, or in a large bowl, and then place the mixture back to the skillet. 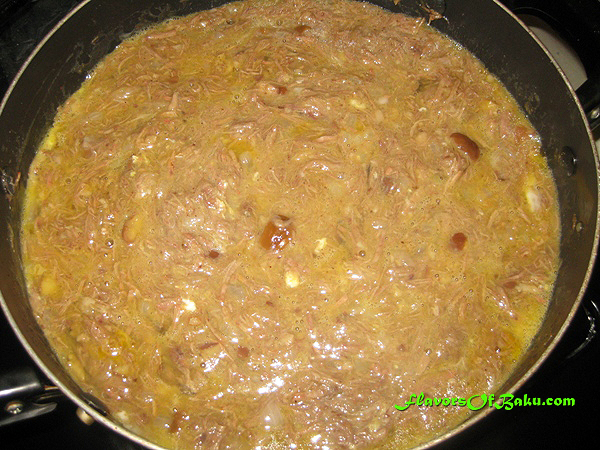 Cover the skillet with a lid and cook Khoyagusht over low heat until the eggs cooked all the way through and have set. Then, turn off the heat and leave the Khoyagusht in the pan for a minute to absorb all the juices. 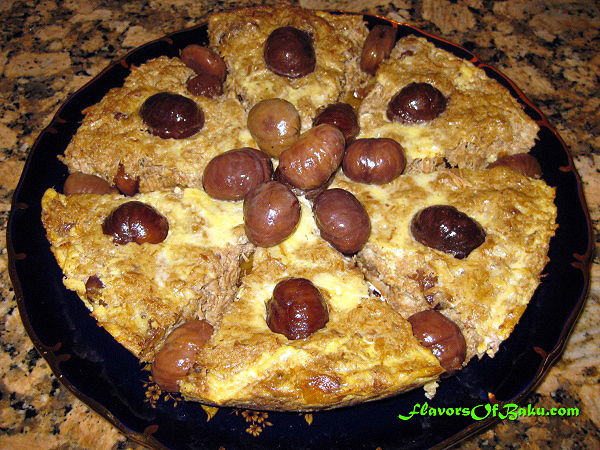 Khoyagusht can be fried in the pan, or baked in the oven.
For baking in the oven method: grease the baking pan with the fat or oil, spread out the meat-eggs mixture and bake in the preheated oven at 350°F (180°C) until eggs are cooked. 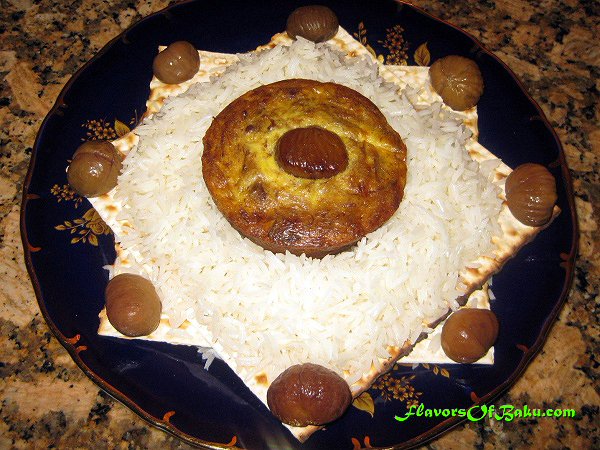 Cut into portion size pieces and serve warm with Matzah bread, or with rice (Osh).